skip to main | skip to sidebar

Henri Nouwen was truly a man for others. When he companioned others, he gave unreservedly of himself because he had a full self to give, a self anchored upon his true, spiritual identity before God as God’s beloved. His effectiveness to reach out in love to the world was directly contingent upon the extent to which he allowed God’s love to reach in to the very depths of his experience. Living “from the center of our being, where our identity is defined by God, not others,” Nouwen pointed out, is what enables us to care and thus minister with real depth and effectiveness. It is true that in ministry, you can only give what you have—and who you are. Nouwen was effective in his ministry of spiritual caregiving because he knew who he was as a minister. Thus the more he embraced that truth and claimed it for himself the more empowered he felt to extend himself to others in ministry. Ministry, to him, is precisely that—“the giving of self.”

Henri Nouwen ministered to others in a soul-deep capacity that distinguishes him as one of the most effective spiritual care providers of all time. Whether in his role as a priest, a pastor, or a prophet, Nouwen shepherded people as one who truly and deeply cared for their spiritual well-being. Behind his intensely personal and caring focus to ministry also lies the conviction that such an approach holds relevance for our technological age: “Scientism cannot replace personalism. Techniques cannot replace ministry. Rationalism cannot replace sensitivity.” Given this conviction, Nouwen decried the growing tendency of “professionalization” in ministry. In his commitment to dismantle the constant elevation of hierarchy in ministry, Nouwen stressed the fact that “[w]e are all healers who can reach out to offer health, and we all are patients in constant need of help. Only this realization can keep professionals from becoming distant technicians and those in need of care from feeling used or manipulated.” Ministry relationship, Henri Nouwen insisted, “can never completely be understood within the logic of a professional contract.” By his own example, Nouwen functioned in every way, as a fully alive, engaged spiritual companion in the journey of people’s lives.

In a life-giving way, Henri Nouwen ministered personally, spiritually, creatively, holistically, and most of all, integratively. The integrated dynamics he utilized in his ministry of formation proved to be effective not because they represented workable tools anyone could dispense on demand but because they embodied his very being—the integrated person that he was. Simply put, his entire ministry was characterized by a ministry of integration primarily because he, first of all, lived out a spirituality of integration. His ministry was but an overflow of his spirituality. Unquestionably, Nouwen ministered out of who he was as a person—a person of deep integrity.

Henri Nouwen’s work of soul care and spiritual formation was never about techniques. Neither was it about programs and curricula—important as they are in ministry. More importantly, it was definitely not about “roles” even though multiple roles have been attached to his person. In the final analysis, it is about the person of Henri Nouwen that made his ministry distinct and undoubtedly fruitful. It is Nouwen’s lived spirituality flowing out of his integrated being that made all the difference. Nouwen, from the start, espoused a unified schema of spirituality which he himself lived out consisting of three integrated movements: to self, to others, and to God. It is a spirituality of integration rooted in the Great Commandment with its equally unified and intersecting dimensions: the love of God, others, and self. This is what made Henri Nouwen a soul companion par excellence!
Posted by wil hernandez at 6:38 AM No comments: 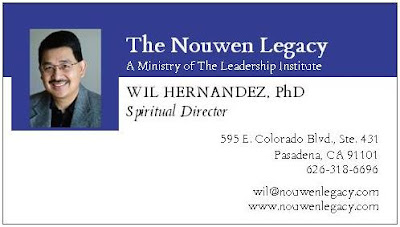 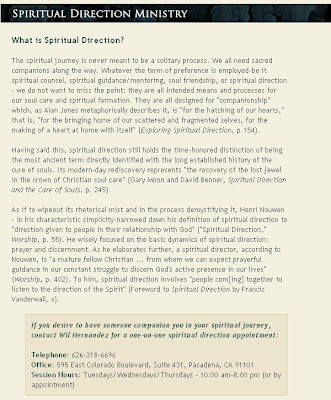 Promote Your Page Too

This blog site is devoted to promoting the spiritual legacy of one of the greatest spiritual writers of the last century.